Here are some events from my family tree with anniversaries in the next 7 days. (I have kept birth/marriage events to those over 100 years ago for privacy.)
Posted by Unknown at 09:25
Email ThisBlogThis!Share to TwitterShare to FacebookShare to Pinterest
No comments:


Here are some events from my family tree with anniversaries in the next 7 days.
Posted by Unknown at 14:00
Email ThisBlogThis!Share to TwitterShare to FacebookShare to Pinterest
2 comments:

One of the benefits of using Custodian as my records database is that I can quickly analyse the data and start to produce statistics about my Tillin One Name Study.

So I have started with Marriages.

If I filter my name index I find that there are 5,307 marriage index records in my database. But this doesn't mean there are 5,307 marriages as each name referenced counts as a separate record. So my next filter is by surname to include those with surnames starting with TILL. This reduces the number to 3,160 names. I then removed any references where the person with the surname starting with TILL was the spouse and not the primary Tillin reference. Finally, I got to 3,061 records from the indexes between 1837 and 2005 (according to Ancestry.co.uk) in England and Wales.

The split by surname was as follows

which is what I would have expected as TILLING is a much more common surname.

To further analyse the data I exported it to an Excel spreadsheet and used a pivot table for easy analysis.
By decade, it looks like the most popular decade for marriages was the 1960s. 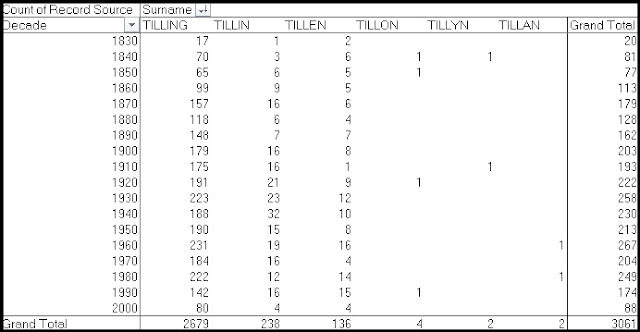 If I look at the TILLIN name itself the top 5 registration districts are Camberwell, Reading, Windsor, Kettering and Bradfield.  This is sort of what I would expect but the fact that Kettering has made the top 5 places was a bit of a surprise although all of these records were from 1936 onwards.

If I look at TILLING the top 5 registration districts are Bristol, Cheltenham, Swindon, Stroud and Warrington. This time Warrington is the surprise as I haven't had very many records from the North of England so that is a new area to look at.

At the moment I'm not sure what this tells me but I find the geographical spread of the surnames quite interesting and maybe I need to look at some sort of mapping analysis.

Posted by Unknown at 13:42
Email ThisBlogThis!Share to TwitterShare to FacebookShare to Pinterest
2 comments:

Tech Tuesday - You Tube with the man behind Family Historian software

As I've mentioned in a previous post I use Family Historian and have done since version 2.

Recently Simon Orde - the man behind Family Historian - was interviewed at RootsTech by Jill Ball and the video can be found below on You Tube.

Posted by Unknown at 17:28
Email ThisBlogThis!Share to TwitterShare to FacebookShare to Pinterest
2 comments:

Who Do You Think You Are? Live 2013 Speakers Handouts Available Online

For those who couldn't attend Who Do You Think You Are Live (and for those who did!) the speaker handouts are now available online at the Society of Genealogists website.

Happy Reading and have a nice weekend!

Posted by Unknown at 15:33
Email ThisBlogThis!Share to TwitterShare to FacebookShare to Pinterest
No comments:

Links to this post
Labels: Who Do You Think You Are Live

This week in my family tree...


Here are some events from my family tree with anniversaries in the next 7 days.
Posted by Unknown at 17:38
Email ThisBlogThis!Share to TwitterShare to FacebookShare to Pinterest
No comments:

How I use Outwit Hub for the TILLIN One Name Study

Following my post on how I conduct my One Name Study I received a tweet from @genejean aka Pam Smith asking how I used Outwit Hub and following a couple more tweets this post was born. (Apologies for the poor quality photos but I'm not a great blogger expert yet!)

If I want to scrape some data I go to Outwit and open the page from within Outwit itself. I like to think of Outwit as a geeky internet browser which allows you to see what's behind the page as well as what you can normally see. For this example I'm going to search for all instances WILLIAM TILLIN in the 1841 England census to keep it small - 3 records. 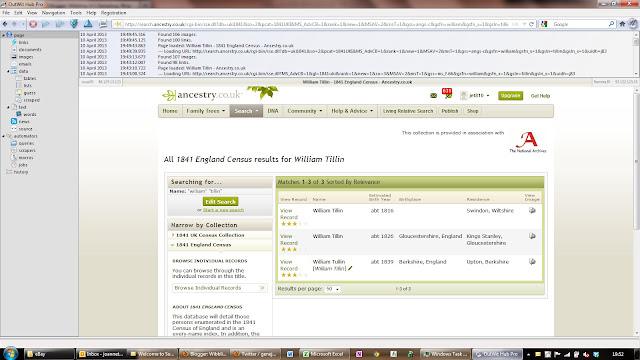 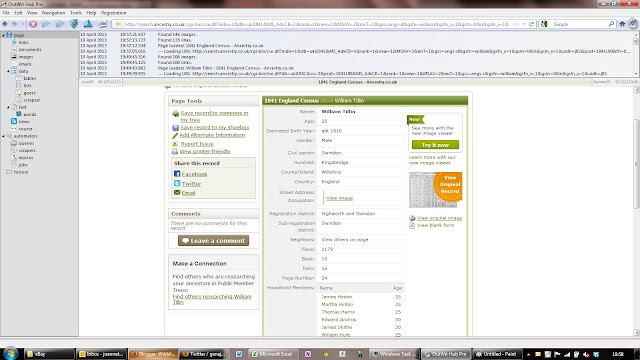 This is the page of data that I want to "scrape" and this is the page that my scraper will go to and collect the data. I've written the scraper myself based on the html behind this page but I won't go into too much detail here about how I did that as it will make this a really long post. I can do more of an explanation in another post if that would help anybody.

So using the back button in the top left hand corner (just like other web browsers) I get back to my original search results. Then I click on the links button (circled in red below) and this gives me a completely different view of the page. 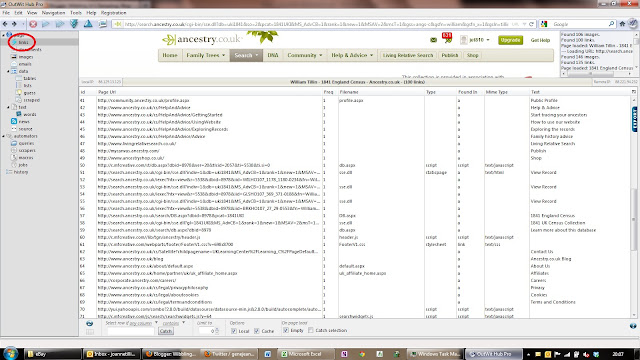 Then I select the rows labelled View Record. These are going to act as an address for the scraper so it knows where to go and find the data. Once it gets there it will apply the rules within the scraper to the data it finds and then return that data to the data catch area. 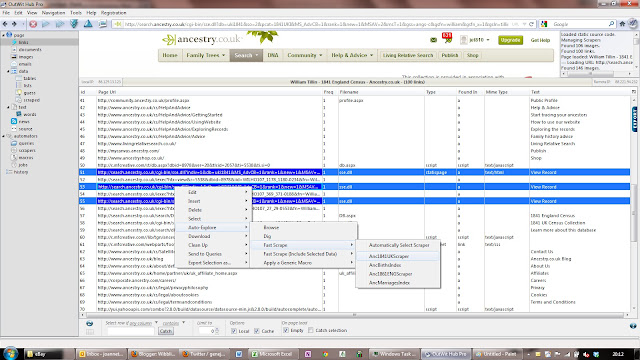 So I highlight the rows and tell it to go and explore using my 1841 scraper (making sure I don't overutilize the resources of the site by exploring too many records too quickly) and this is the data it brings back in about 10-15 seconds
. 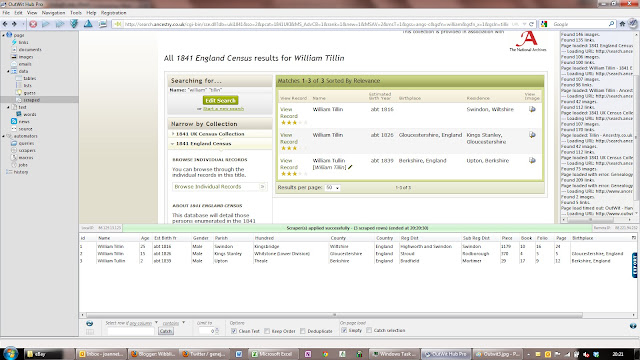 You can see the detailed information at the bottom based on the 3 records from the original search. The data can then be exported as a csv or excel file and added to the database.

I hope this makes sense - I've found it exceptionally useful for census data as well as civil registration data. I would not have all the data I have if I'd had to collate the information in the traditional way.


Posted by Unknown at 21:31
Email ThisBlogThis!Share to TwitterShare to FacebookShare to Pinterest
7 comments:

Guild of One Name Studies